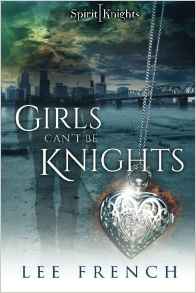 This is a very different sort of YA story, dealing with a young girl (Claire) who has been orphaned and finds herself in the foster care system.  Trouble seems to find Claire at every turn, until she meets a young father-figure knight named Justin.  Even more trouble follows as the two alternate between the modern world and the fantasy world, battling corrupt spirits.  When I first read Lee French’s “Girls Can’t Be Knights” from the Spirit Knight Series, I began writing a review from an adult’s point of view.  But having written several Young Adult fiction books, I knew the difficulty that adults can have when trying to critique something written for a much younger audience.  So I asked my twelve-year-old to read it and tell me what she thought of it.  This is how much our views differed!

Me:  This was my main complaint as I didn’t feel I knew enough about the main characters.  I wanted more fleshing-out.

12 y.o.:  Claire and Justin were awesome.  I liked how she seemed like some girls at my school.

Me:  I wanted more background so that I could understand why the characters acted as they did, rather than having to wait until the end for explanations.

12 y.o.:  I liked how it moved so fast without having to read a bunch of pages about every small detail.

Me:  The story was rather short and setting descriptions were on the minimal side.

12 y.o.:  There was enough description of places to move the story along.  I was so interested in the action that I thought there was just the right amount.

Me:  There was an abundance of conflict, but I wasn’t always sure I understood what some of the terms really meant (such as ur and ne-phasm).

12 y.o.:  Lots of it!  There was always something going on that kept your interest.  It made me want to keep reading until the end!

Me:  The resolution did satisfy me, but I would have preferred it not to come all in a rush at the very end.

12 y.o.:  Everything that I was hoping would happen, did come together at the end.  I loved how it ended.

Desire to continue reading the series

Me:  I did enjoy this book, but probably would not continue with the series.

So you see, Lee French has targeted her audience well.  The young teen and preteen reader seem to love or not mind the very things that I did not care for.  I’m betting your young reader will too.

Kathleen Barker was born and raised in Baltimore, Maryland. A graduate of Blessed Sacrament, the Institute of Notre Dame and Towson University, she spent twenty years as the much-traveled wife of a Navy pilot and has three children. While working for a Fortune 500 insurance company in New Orleans, she wrote feature and human interest articles for their magazine and received the Field Reporter of the Year award. After Hurricane Katrina, she returned to her beloved state of Maryland where she started work on “The Charm City Chronicles”. All four volumes, “Ednor Scardens”, “The Body War”, “The Hurting Year”, and “On Gabriel’s Wings” are available in Amazon’s Kindle store.

Mountains of the Moon (World of Neveyah)

Wynn Farmer is a simple man with a complicated life. A lightning-mage, it is his task to protect the people of Neveyah from the bizarre and dangerous creatures rumored to haunt the Northern trade road. When peaceful villagers begin vanishing, the trail of evidence leads Wynn and his companions hig...